Who is Atwood Fire Extinguishers?

Atwood Fire Extinguishers is a division (& d/b/a) of Northeast Security Solutions, Inc. We offer a wide selection of services for fire extinguishers. We perform these services under a different brand because fire extinguishers are not a product that most security companies provide. (Of course we're not like other security companies!) Marketing these products under a separate name allows us reach our customers in a more efficient manner but the division operates with the same employees and from the same location as Northeast Security Solutions.

What services do we provide?

What Type Of Fire Extinguisher do I need?

There are many different types of fire extinguishers on the market. You need to make sure that you choose the correct one to ensure the safety of your home or business, your possessions and, most importantly, your family or team members. There are a few key characteristics that determine which type of fire extinguisher is best suited for your environment. They include the type and size of anticipated fire, the occupants of the building, the type of building you're in, and other characteristics of the building such as size and construction, to name a few. Your best bet is to Contact Us to speak with one of our experienced staff members to help you choose the best one. Fire extinguishers are broken down by classification of the fire they are designed to fight. Most models can safely extinguish a combination of multiple types of classes of fires. Check the label of the extinguisher to determine its rating,. 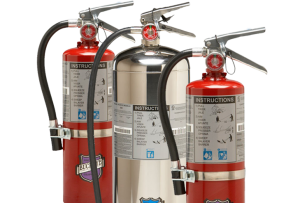 Fire extinguishers that are located in any commercial, industrial, or large residential setting are required by law to be inspected every year by a qualified inspector. In addition, they need to be serviced every six years to ensure they will work when you need them to.

How do I use Fire Extinguishers?

Knowing how to use a fire extinguisher is just as important as which type to use. One must also keep in mind that there are times when one should not attempt to put out a fire.

Before deciding to fight a fire, be certain that:

If you have decided to fight the fire, be certain that you do it correctly. A helpful acronym can help you to remember proper fire extinguisher use. It is a good idea to have this information posted near your extinguishers for quick reference.

Aim at the base of the fire, not the flames. This is important because in order to put out the fire, you must extinguish the fuel.

Squeeze the lever slowly. This will release the extinguishing agent in the extinguisher. If the handle is released, the discharge will stop.

Sweep from side to side. Using a sweeping motion, move the fire extinguisher back and forth until the fire is completely out. Operate the extinguisher from a safe distance, several feet away, and then move towards the fire once it starts to diminish. Be sure to read the instructions on your fire extinguisher. Different extinguishers recommend operating them from different distances. Remember: Aim at the base of the fire, not at the flames!