When most people think about security systems, they think about systems that alert the authorities and sound an alarm in the case of a burglary or fire. However, many of our customers install security systems in order to install panic devices. Panic buttons come in many different forms for many different purposes. Our customers often ask us about specific situations that could be safer with these devices installed. For example, medical emergencies, break-ins that occur when a security system is disarmed, and robberies in a bank or store can all be helped by the presence of a panic device. In this post, we will define a panic button and explain its purpose. We will then detail some of the different applications we use them for in unique settings. Let’s begin by explaining what a panic button does.

What is a Panic Button and Why Do People Install Them?

Panic Buttons for the Home

Residential security systems are installed with a few unique concepts in mind. First, homeowners often find themselves home alone. This leads to a different set of concerns than being out and about in public. Medical situations, for example, generally receive an immediate reaction when people are around. At home, this is not the case. Homeowners also want the ability to call for immediate help if they wake up to a potential emergency situation. Let’s look at a few of the ways we use panic buttons to address some of the concerns unique to home security. 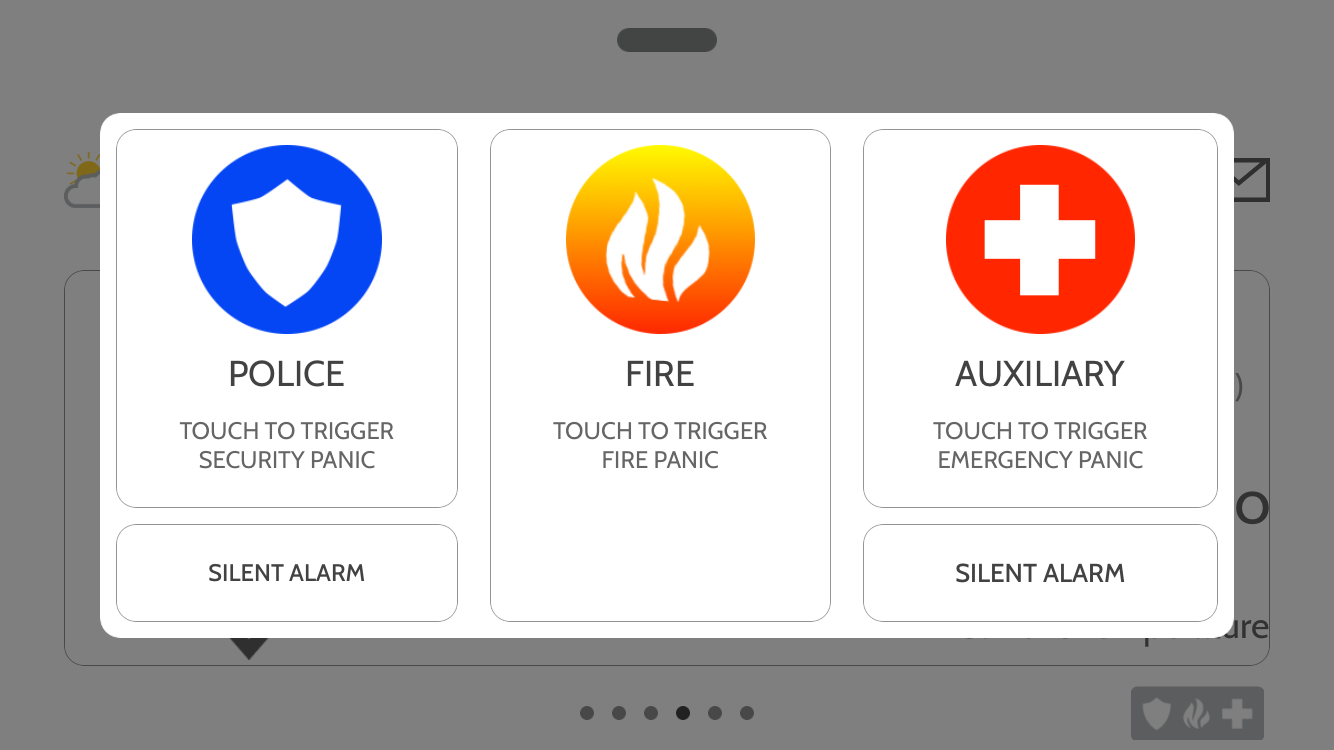 The panic buttons on the IQ Panel 2 by QOLSYS provide several different options to ensure you get the exact emergency response that you need.

A security system’s keypad generally has multiple panic buttons built in. The security panels we use, such as the QOLSYS IQ Panel 2, have police, fire, and auxiliary panic buttons that allow one-touch emergency responses to multiple emergency scenarios. These functions allow for a quick and specific response to these situation. Because we generally install a keypad near the door that homeowners use to enter and exit their home, this also allows homeowners to call for help through their security system while fleeing from home. In the case of a fire, for example, a homeowner can activate the fire panic button while escaping the house. This creates a quicker response than attempting to make a 911 phone call after the fact.

Our security panel also has another built-in panic feature. In the case that a burglar creates an alarm while the homeowner is present, they will likely want the homeowner to disarm the system. We offer a “duress code” that simulates disarming the alarm system. However, even though the siren stops blaring, the system sends a silent alert to the central station. This unique panic feature creates a quick response from the police department because it is a potential hostage situation. Between the panic buttons and the duress code, your security system keypad provides several options for immediate emergency response. 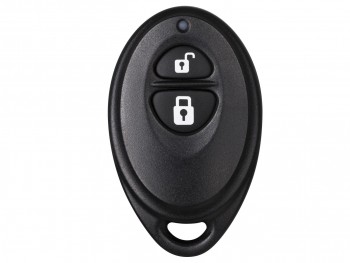 A keychain remote, such as this one by Interlogix, can arm and disarm your security system remotely. If a user holds down the “arm” and “disarm” buttons at the same time, the remote also acts as a panic button.

Wireless security systems generally allow you to use a remote to arm and disarm your system. In some cases, you can also use this remote to activate your alarm system. This means that you can carry a panic device with you at all times. You can decide whether or not activating your remote panic button activates a siren. Another type of remote panic button is a medical pendant or watch. We discussed these devices in some detail in our post “6 Security Devices that Improve Senior Citizen Safety in the Home.” Medical devices provide peace of mind for elderly homeowners and their families. Activating these devices does not sound an alarm. The central station will know the purpose of this alert and react accordingly. This generally involves calling an ambulance and alerting the homeowner’s family to the situation.

An interactive cellular dialer, such as our powered by Alarm.com, allows you to use your smart phone as a panic device. Just as with a remote panic device, this option allows you to have a panic button with you at all times. However, a remote requires you to be close to your security system to activate the alarm with it. A phone does not have this limitation. Also unlike a simple alarm remote, your Alarm.com phone app provides police, fire, and medical-specific panic devices at your fingertips. You can also choose between an audible alarm and a silent alarm when you activate the button. With this option, as long as you carry your smartphone, you’re never more than a few seconds away from calling for immediate help.

In public, you have much less danger of finding yourself caught alone in a dangerous situation than while at home. However, being in public brings its own set of potential emergency situations. Cash registers in stores, groups of students in classrooms, and rooms full of patients in hospitals all call for the installation of panic devices that accomplish very specific goals. In retail settings, these devices should often remain out of sight of the general public. In large school or human service-related settings, the activation of a panic button should provide certain specific information. Let’s look at some of the factors that we keep in mind when installing panic devices in these instances. 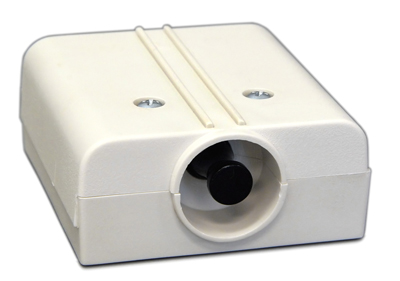 Small panic buttons that can be installed out of sight of the general public, such as this model made by United Security Products, allow employees to discreetly called for help without attracting attention.

In a hold-up situation, getting to a keypad or pulling our your phone will not be practical. With this in mind, we often install panic buttons underneath counters or in other discreet locations. This allows an employee to activate the device without drawing attention. In most cases, our customers also wish for this type of panic button to not activate a siren. When violence is a possibility, remaining calm can help keep a situation under control, and the presence of a siren will not help in this regard. Upon seeing a silent panic alarm, the central station will dispatch the police without calling the premises first.

In some settings, customers wish for the activation of a panic button to alert others on premise. In hospitals, for example, patients can use a panic button to send for immediate medical assistance. The same system can also incorporate panic buttons for employees to use to send for help. These panic buttons generally also include a tracking device to provide the location of the user. Unlike the previous options in this post, these systems do not tie into an existing security system. Instead, they have their own infrastructure that communicates with a central station. Knowing whether or not a nurse or patient needs help in a hospital, and where help is needed, is crucial in these cases.

Certain situations call for an even more drastic response than an alert sent to the front desk. In addition to sending an alert, some panic buttons can also create a lockdown situation. Schools often request these types of devices. The communication for lockdown panic buttons often relies on the internet rather than a security system or hardwired infrastructure, and the buttons themselves can be installed on a wall, desk, or even carried with teachers and staff. When activated, a lockdown panic button notifies the police, shuts down access to the building from the outside, notifies staff of any open doors, and also activates a warning played over a PA/radio system. Staff can customize what they want the actual warning to say. In addition, this action can send an automatically generated mass email. Colleges and universities, in particular, generally elect to take advantage of this option.

Where Should I Install Panic Buttons?

After reading this post, you should have some ideas on how panic buttons could make your home or business more safe. Areas where people spend the most time should receive priority. Likewise, areas most likely to attract danger should also receive special attention. If you have any questions about specific uses for panic buttons or general questions about these devices, please do not hesitate to contact us. We provide free site surveys to both home and businesses alike. Together, we can assess the most likely areas for someone to need immediate assistance. We will then work with you to create a system of panic devices that ensures help is always available with the push of a button.