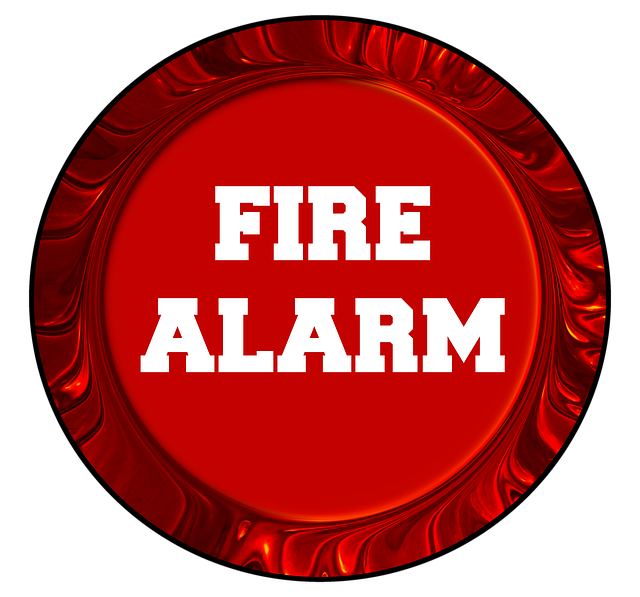 In our post on Required Security for New Businesses, we discuss the role of life safety on commercial properties. These systems obviously play an important role. After all, they help notify the people in businesses about potentially life-threatening emergencies. Furthermore, monitored fire alarms also create a fire department dispatch, which can help save your property and even the lives of people trapped in a fire. For this reason, state laws mandate that many businesses have these systems installed and maintained. However, despite their importance, many business owners and employees know very little about their own fire systems! In this post, we will run through the basic fire alarm components that create these systems.

We will begin our discussion with a look st the “brains” of a fire alarm. No matter how big or small, all fire alarms have a control panel. Additionally, they also must have a device installed to communicate issues and status updates. After examining the roles of these objects, we will look at the types of devices connected to fire alarms. These include devices that “create” alarm activations by detecting issues or through manual operation, as well as devices that alert people to issues. Now, let’s get started with a look at the most important aspects of any fire alarm! 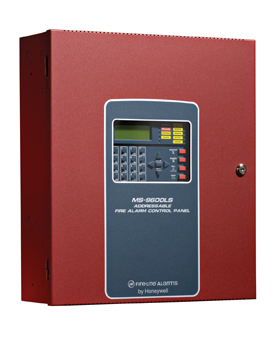 Fire alarm panels, such as this model by Firelite, house the fire alarm’s control board.

The Brains of the Operation

As we mentioned earlier, all fire alarm systems have a couple similar components. No matter how much, or how few, devices get connected to them, all fire alarms must have a control panel and a keypad, or “annunciator.” From there, these systems can vary greatly. In fact, we install some fire alarms for the sole purpose of sending out for help if a fire activates a building’s exsiting sprinkler system. In this case, the panel, annunciator, and one lone smoke detector installed above the panel make up the entire system! However, most fire alarms have other devices as well. We’ll get into the details about those in a bit. But now, let’s look at fire alarm panels and annunciators, and what they do.

Fire alarm panels, such as the one pictured, provide a control board that powers all of the system’s devices. In addition to providing power, the panel also monitors the status of the devices connected to it and will create a notification if a device malfunctions or loses power. Furthermore, the panel houses the system’s phone communication equipment used for monitoring the alarm.

Generally speaking, we can categorize the fire alarm panels we install as either “conventional” or “addressable.” Conventional panels take a set number of fire device “zones.” These zones consist of several devices all wired to the panel individually. Upon activation, the panel reports which zone has created the alarm. In small businesses, customers may find knowing which area has created an alarm — without knowing which exact device — sufficient. However, we do have a solution for those who require more precise information from their alarm panel.

Addressable fire alarm panels can create a report on the status of each individual device on a system. Addressable panels and devices cost more money to purchase than their conventional counterparts. However, these systems can still save customers money. When installing an addressable alarm, we can run just one wire from the panel to all of the alarm’s devices in a giant loop, saving quite a bit of wire and labor in the process. In big businesses, this can add both security and cost savings over installing a conventional system. Let’s look at another one of the most very basic fire alarm components on any system.

Annunciators: Getting a “Read” on Your Alarm Status

For the most part, our customers do not interact at all with their fire alarm panel. For them, the system’s annunciator represents the most important part of the system. This device has a screen and a keypad on it, allowing customers to read and react to information on alarm devices or system trouble signals. In fact, many customers speaking in less technical language call the annunciator the “keypad.” Annunciators of conventional alarm panels will provide zone-specific alarm and trouble reports. Conversely, addressable fire alarm annunciators will display the exact devices experiencing alarm or trouble conditions. Annunciators and fire alarm panels alike must be painted red so that authorities and technicians can easily identify them. At this point, we’ve gone over what we consider to be the “brains” of any fire detection system. Now, let’s dive into the types of devices we install throughout a building when installing a fire alarm. 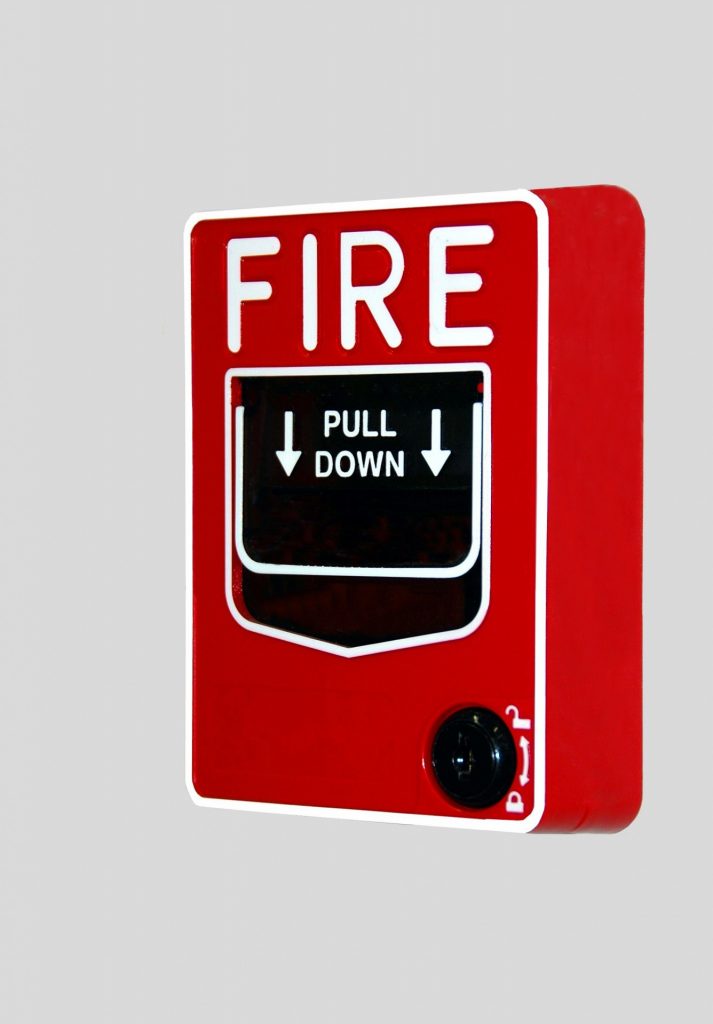 Manual pull stations are one of the most recognizable initiating devices on any fire alarm system.

Finally, some initiating devices create alarm responses only when someone intentionally activates them. Namely, manual pull stations require action from individuals in order to create an alarm. Therefore, they do not have any fire or alarm trouble “detection” built into them at all. However, the fact that they create a fire alarm response still places them in the category of initiating devices. Now, let’s check out some devices designed to alert people to an alarm, rather than create one!

As you can probably guess by the name, notification devices notify those in the building about an alarm condition created by an initiating device. When people hear this, they often think of a siren as a potential notification device. However, fire alarms generally use devices called “horn strobes” that create both a blaring siren and blinking strobe response to alarm activation. We use horn strobes rather than sirens due to the Americans with Disabilities (or “ADA”) act of 1990. This act made it mandatory for businesses to include notification devices that alerted the hearing impaired to a potential emergency.

Additionally, we also install strobes that do not create sound at all to alert people to a fire. Installing a mix of horn strobes and their “lights only” counterpart helps ensure that people throughout a building have a visual cue to evacuate, without creating an unbearable amount of noise. Finally, speaker strobes create a vocal evacuation message to create an extra layer of notification to an emergency situation. These devices can even allow for the fire department or other emergency personnel to communicate directly through them with the use of a live paging microphone. As you can see, we use an impressive array of basic fire alarm components for both creating and communicating alarm events!

Putting Your Knowledge of Basic Fire Alarm Components to Good Use

We hope that you’ve found this rundown of basic fire alarm components informative and useful. As one of the most important yet hard-to-understand aspects of the security industry, these systems and the language associated with them can easily confuse customers. Therefore, we encourage you to contact us with any questions you may have about the material in this post. Moreover, we also encourage you to take advantage of our free site survey program. We offer these free surveys to both new and existing customers alike. Perhaps you need help in designing a fire alarm with the right components. Or, maybe you have a system in place that needs updating, or you’d like someone to help explain the alarm’s details for you. Either way, we will be happy to help. Together, we can create a complete fire alarm that keeps your business as safe and secure as possible!