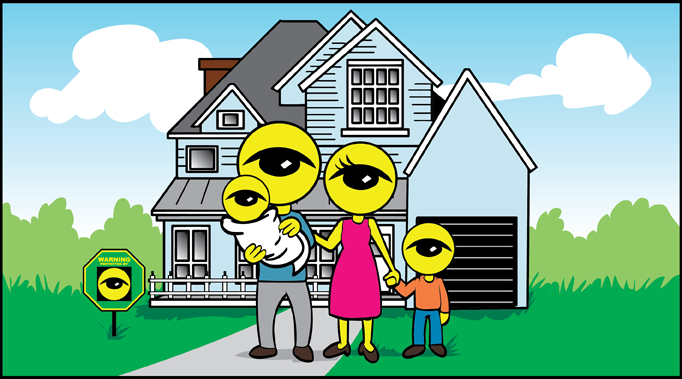 A home security system can provide some of the most effective and affordable detection and notification of a crime, as well as peace of mind. For one, a burglar alarm lowers your risk of becoming a break-in victim. It is widely estimated that homes without an alarm are 300% more likely to be broken into than a home with an alarm system. Also, according to a study by Criminal Justice and Criminology researcher Joseph Kuhns, roughly 83% of a group of convicted burglars would check to see if a home had an alarm system before attempting a break-in. Out of this same group, only around 13% would continue the break-in if an alarm system was found.

The presence of an alarm can also greatly reduce the damage done during a burglary. The latest FBI data reports that the average burglary costs $2,251, which is much higher than the cost of the average alarm system. In the unlikely event that a home with an alarm system does get broken into, the burglar is unlikely to stay in the house long while the siren is going off.

However, just having a security system in your home is not enough. Many security system owners do not take full advantage of the features their system offers. Following these security system use tips and best practices will help you use your alarm system at its full potential.

Security systems usually allow you to create multiple user codes. While many homeowners give their own “master” code out to anyone who needs to enter the house, this can lead to issues down the road. Now anybody who knows this code can come into the house at any time. It is also impossible for the central station to help you track down who turned the system off if every user is using the same disarming code.

If you do allow people into your home while you are gone, create a user code for them to use that is different than your system master code. This provides you with extra security on multiple levels. For starters, you can delete a user code once the person it belonged to is no longer allowed entry into the house without affecting the users who should still have access. In addition, if someone did commit a burglary by entering a code to turn your alarm off, you could track which code was used to turn it off. This can be a major factor in solving a burglary if it was an “inside job.”

Most alarm systems include the option to arm your doors and windows without arming your motion detectors (if you have any). This allows you to walk around your house without triggering an alarm and still alert you to someone breaking in through a door or window while you are home. While many customers only plan on turning their security systems on while they are away from home, that means their system is only working half the time. Burglars do not usually want to break in to a house that is occupied, but when they do it’s especially dangerous. Doors provide the point of entry for most break-ins, so even if your security system doesn’t have any window contacts, you should arm the system while you’re home.

Another option for arming your security system when you go to bed is using a second keypad to arm the entire system as if you were leaving the house. Just don’t forget to use the same keypad to turn the system back off in the morning! Having a master bedroom keypad is a good idea in general, because it will allow you to access the keypad’s panic buttons. If you hear or see something suspicious around the house, with the press of a button you can activate the system’s siren and create a police response immediately. You can also check what caused the system to trigger without leaving your bedroom. This can prevent a dangerous confrontation if an actual burglary does occur.

Guarding your home against burglary is certainly the main reason most people install a security system. Adding smoke, heat, and carbon monoxide detectors to your system can also save you and your home against the devastating effects of a fire or deadly gas by alerting the central station when a detector goes off. From there, the central station dispatches the fire department. This is an affordable upgrade to your system that could save your home and, more importantly, save the life of you, a family member or a beloved pet in the event of a dangerous situation.

Recent updates to the fire code have made adding this feature even easier. Previously, putting monitored fire devices in your home required you to replace all of your existing devices. However, with the new changes you can add as few as one smoke detector to your security system as long as your home already meets the current fire code.

At Northeast Security Solutions, we recommend that your alarm system communicates with our central station operators via a wireless Alarm.com cellular communicator. Cellular communication provides an extra level of security. In the past, burglar alarms traditionally contacted the central station through a telephone landline to create a police response to a burglary. However, these landlines often times came into the house unprotected and a burglar could simply cut the telephone line before they entered the home to ensure the police would not be contacted even if the siren was going off.

Installing a cellular communicator in your alarm system can prevent that. These communicators use the same signals that cellphones use in order to talk to our central station. The device is typically installed near your control panel and is completely within the space covered by your alarm system. This means a burglar would have to set off your alarm in order to approach the device and attempt to disable it, but the communication is highly likely to have been sent before that could happen.

This option can also save you money. Many security system owners only have a telephone landline for their alarm system. If this is the case for you, installing an Alarm.com cellular communicator allows you cancel your telephone service without affecting your alarm. The additional monthly fee for the access to the wireless signal is usually less than half the cost of a telephone landline.

Some cellular communicators, such as the Alarm.com version, also provide a direct connection between you and your security system, which adds security to your home in several ways. Once this device is installed, you can control your alarm with a smartphone or computer. You can turn the system on from work if you had forgotten to do so when you left the house. A schedule can even be added to your alarm so that it sends you a notice if you forget to turn the system on by a certain time. You will also have the ability to turn the system off for a short amount of time if someone needs to enter your home while you are gone. This is less risky than giving out your alarm code or even creating a temporary code that you may forget to delete from the system. Notifications from the system will let you know if someone does use a code to disarm the alarm, so if you were not expecting anybody you can call a neighbor or the authorities to investigate.

5. Turn Your Home Into a Smart Home

One configured, an Alarm.com communicator allows you to add interactive devices such as lights, cameras, thermostats, locks, and more to your home. These devices can all be controlled with a smartphone or computer. For example, you can turn lights on and off remotely to give the appearance that you are home or make sure you aren’t coming home to a dark house. Cameras installed at entrances or main areas of your property will provide motion-activated images and video clips of their surroundings. These clips will also pop up as a notification on your phone so you never have to wonder who’s approaching the door. Have your thermostat automatically adjust when you arrive or leave your home or get alerts when the kids change the settings without your permission. Unlock the door for the dog walker without having to give them a key.

This is certainly not a full list of every option available to you for your new security system. It is, however, a good starting point to make sure that you are taking simple steps to maintain your safety and get the most benefit from your alarm system. We would also encourage you to contact us if you have any questions about these or other actions you can take to make sure you are taking full advantage of your security system.