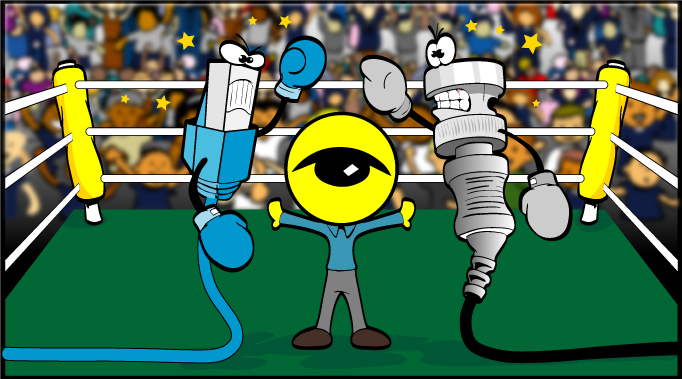 So you’ve decided you want to buy a camera system for your home or business. Perhaps you need the cameras because you had a burglary you’re responding to or maybe you just want to deter an incident from ever happening. Either way, you’ll want to make sure you’re an educated consumer before making a purchase. Once you start your research, you’ll find there are thousands of manufacturers of cameras and countless camera options that can make determining what’s right for you overwhelming. Ambient lighting where you’re recording and video storage location are just two of many factors to consider when narrowing your choices. For a more complete list of things to consider before buying cameras check out our Residential Security Cameras and Commercial Surveillance Cameras pages.

For this blog post we’re going to dive into deciding between analog camera technology or IP camera technology. Both options will record what is happening at your location but the technology, price point, and features of analog and IP cameras can be very different. To help you make your decision we’ll outline some of the main differences between these two systems, including how these systems work as well as the strengths and weaknesses of each.

Before we dive into the meat of the differences, there are a few terms that need explaining. If you’ve ever looked at the “spec sheet” for a camera (like this one), you’ll know what we’re talking about. Being able to compare the technical details of these two systems will require you to know what the terms that manufacturers use to measure one system against another mean and how they actually impact the recorded footage you’ll get.

The number one question most people want an answer to with any camera purchase is “How good will the image quality be?” The clarity of a camera’s picture is usually expressed in “lines of resolution” for entry level to mid level camera quality levels and in “pixels” for higher picture quality levels.

A camera sends images to a recorder in sets of vertical and horizontal lines. To measure the horizontal resolution of an image, you must first make the picture exactly as wide as it is high. Standard definition images are generally displayed at an aspect ratio of 3:4. This means that the picture is only 75% as high as it is wide. With this aspect ratio, ignoring the last 25% of a display’s width allows you to measure horizontal resolution (also referred to as TV Lines or “TVL”). Once a properly-sized image is created, counting the number of vertical lines that make up this image provides us with our resolution. The “Lines of Resolution” number on a camera’s spec sheet corresponds to this method of measuring picture clarity. All other stats being equal, a camera with more lines of resolution will produce a better quality image than a camera with less. As time goes on, manufacturers are finding ways to get more and more lines of resolution and improve image quality.

Every image captured by a camera is made up of hundreds of thousands — if not millions — of smaller images. Each of these images is called a pixel, and one million of these pixels is called a megapixel. Analog security cameras built with NTSC standards in mind generally create video with between 0.1 and 0.2 megapixels.

Two cameras with the same resolution can vary in pixel counts. For example, a camera that creates a 2 megapixel picture and a camera that creates images with 3 megapixels can both provide a 1,080-line display. The benefit of the 3-megapixel camera is that it can be zoomed-in to an image without losing focus more than the 2-megapixel camera can. 1/10th or 1/5 of a megapixel doesn’t sound too impressive, so analog cameras don’t usually list this statistic on their spec sheet. IP cameras usually have more than a million pixels so they are more likely to list this statistic on their spec sheet.

What are the Differences Between Analog and IP Cameras?

Analog camera technology has been around longer and is more common than IP. Analog cameras send video back to a recording device called a Digital Video Recorder, or DVR. The video footage is traditionally sent from the cameras to the recorder through a coaxial (or coax) video cable. A separate cable also connects the cameras to a power source. These cameras usually capture video with roughly 480 to 720 lines of resolution. The technology is based on standards set by the National Television System Committee (or NTSC) in the mid-20th century to regulate television broadcasts. The coaxial cable used to wire these cameras to the DVR also has limitations which make sending a signal of greater quality than the NTSC regulations difficult. In many cases, the picture quality produced by these cameras is acceptable. However, modern High Definition televisions display images at 1,080 lines of resolution and some at over 4,000 lines of resolution which can leave consumers wanting more form their surveillance cameras. Attempting to zoom in on an image captured by an analog camera often creates a blurry and unclear image, due to the camera’s low resolution.

IP (or Internet Protocol) cameras transmit video over a computer network. These cameras can sometimes store video at the camera itself, but are usually wired back to a Network Video Recorder (or NVR) for longer-term video storage. IP cameras are connected by CAT (or Category) wire to an Ethernet-based power source.  Unlike coax, CAT cable has wire for both video and power. IP cameras can deliver HD-quality picture, and users of an IP camera can also zoom in on a picture without noticing any decrease in image quality. The larger the pixel count, the more an image can be zoomed in. An IP camera generally produces images between 1 and 5 megapixels, but some IP cameras record video with up to 20 megapixels.

As with many products, you typically get what you pay for when it comes to camera systems. IP cameras sometimes cost much more than their analog counterparts. The biggest question to you as a consumer is whether or not this change in quality is worth the jump in price. When IP-based systems first entered the market, it was common for them to cost three to four times as much as a similar analog system. While the price gap has closed significantly, there is still a difference in price between the two systems. Just as the gap between the prices of these of systems have closed, so has the difference in quality. Manufacturers are finding ways to get higher priced analog cameras to be capable of recording video at quality similar to HD. The cost decrease of IP equipment has caused some customers who may have been hesitant to pay top dollar for a camera system a few years ago to choose this option. Likewise, the new higher-quality analog equipment has convinced some customers to go with that option over IP.

What Other Types of Surveillance Systems are Available?

There’s a saying that says, “You can’t have your cake and eat it, too!” Well, that doesn’t hold water when talking about cameras. Maybe you have some areas where the image an analog camera produces would be fine for you but you have one special area that requires the quality image that an IP camera produces. Or perhaps, you already have an analog camera system in place and want to start converting to an IP system but don’t have the budget to convert everything at once.

Fortunately, there are hybrid systems available that combine the benefits of the two. For customers wishing to add IP and analog cameras, a combination or “hybrid” DVR/NVR can be used. The recorder has inputs for both analog style and IP cameras. Some higher end Hybrid Recorders can be reconfigured as time goes on to change the ratio of analog to IP inputs. It can be a budget-friendly solution for your camera system.

There are other more specialized systems available. HD-SDI (High Definition-Serial Digital Interface) systems, such as this one made by Speco Technologies, allow for the sending of 1080P high definition picture through analog coax wiring. The price point of these HD-SDI systems is generally between that of analog and IP systems. However, unlike most non-HD-SDI camera equipment that is compatible with cameras and recorders of different manufacturers, HD-SDI systems usually must have all parts from the same manufacturer. Once you choose a line of equipment, it may not be compatible with other manufacturer’s equipment.

Which Type of Camera System is Right for Me?

For years, many in the security industry have claimed that analog technology is on its way out. While they may be on the decline, analog systems are certainly not extinct. The advent of hybrid systems also allow you to utilize analog equipment you buy now without making today’s investment useless if you decide to upgrade to IP in the future.

The type of surveillance system you purchase should reflect a balance of how you plan to use the system and your budget. In a setting that does not require an extra-sharp image or zoom function, analog systems often work just fine. Examples could include office cameras making sure employees are doing their jobs or exterior cameras watching a garden for pests. However, when details are important, IP-based systems are often a better option. This would include instances where getting a good description of an individual or a license plate are required. Thinking about the intended use of your system will go a long way towards helping you decide what type of system you should buy. Utilizing a security professional can help you in weighing out your options to make sure you’re making the best decision and ensure you’re ultimately happy with your purchase.